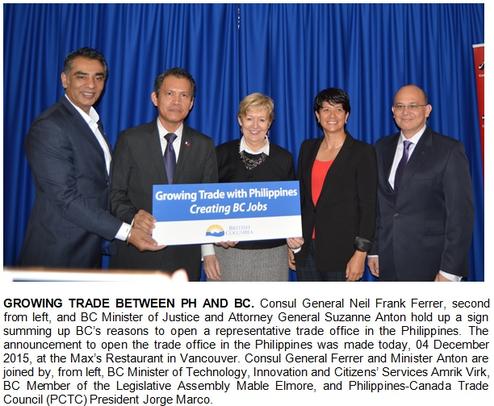 Vancouver — The Government of British Columbia (BC), Canada, recently  announced it will be opening a trade and investment representative office in the Philippines as part of its “Asia strategy.”

BC Minister of Justice and Attorney General Suzanne Anton, who represented BC Minister Teresa Wat in making the announcement, credited the Philippines’s rapid economic growth, BC’s growing trade with the country, and BC’s “strong relations” with the Filipino community as primary reasons for BC’s choice of Manila as site of the trade and investment office.

“A presence in ASEAN (Association of Southeast Asian Nations) will put BC on the doorstep of an economy that’s valued at $2.4-trillon and has annual growth forecasts above 5 percent for the next five years,” Anton said.

The Manila trade office will be the 12th  such office established by BC, including those in Japan, Republic of Korea, India, China, Europe and the US, as part of its aggressive drive to intensify its trade, particularly with the Asia-Pacific Region.

In response to the much-anticipated announcement, Consul General Neil Frank Ferrer of the Philippine Consulate General in Vancouver said he regards the decision as “a vote of confidence in the Philippine economy and business environment,” which “certainly reinforces the country’s reputation as a rapid-growth area, a preferred trade and investment destination, and an ideal business hub in the ASEAN region.”

“Looking ahead, we see so much opportunities to strengthen and deepen business ties between the Philippines and BC,” Consul General Ferrer said, noting the increased activity in trade and investment across the Pacific and the presence of a growing number of BC companies operating in the Philippines.

Another BC official present during the announcement, BC Minister of Technology, Innovation and Citizens’ Services Amrik Virk, noted that it is the strong human relations between BC and the Philippines that “opens new doors for trade and investment and contributes to prosperity.”

The announcement, which was also attended by members of the Filipino-Canadian community, including Filipino-Canadian business people and business professionals, was made at the iconic Max’s Restaurant (Cuisine of the Philippines) at the busy Kingsway district of Vancouver.