The Edmonton Police Service Auto Theft Unit has recovered approximately $863,130 worth of high-end travel trailers and recreational equipment that were allegedly stolen and resold to unsuspecting buyers across Western Canada. Police are asking for the public’s assistance in locating one of the accused from their fraud investigation who is wanted on warrants, as well as finding any other stolen property or victims.

In October 2013, the EPS became involved in a stolen property file and executed search warrants at a residence in the area of Lindsay Crescent in south Edmonton.  At the time, police recovered a stolen Ford F-350 truck, a Custom Weld Viper 2 jet boat, a Gateway boat trailer, and other stolen equipment totalling approximately $198,300.

EPS Auto Theft Unit detectives began a complex investigation with the assistance of the RCMP, the Saskatoon Police Service, and the Insurance Bureau of Canada, and uncovered a suspected fraudulent registration scheme involving stolen recreational vehicles that stretched across Alberta, Saskatchewan, and British Columbia from spring through summer 2013.  The reported thefts occurred from a wide range of locations from residential driveways to parking lots to storage lots predominantly outside of Edmonton.  In most cases, trailers and equipment were given false vehicle identification numbers and registered using counterfeit bills of sale before being sold through online classifieds such as kijiji.  Buyers would then respond to the ads and arrange to purchase the recreational equipment.

The EPS recovered an estimated $664,830 in additional stolen property including: 11 travel trailers, three enclosed trailers, two fifth wheels, one utility trailer, two boat trailers, and one jet boat.  These items ranged in value from approximately $2,500 to $59,000.  Police were able to identify the original owners and return the property to them, however, many innocent buyers are now out significant amounts of money, such as one individual from Kelowna who purchased a travel trailer for $35,000.

As a result of the fraud investigation, a total of 95 charges were laid against three men from Edmonton:

EPS detectives continue to investigate and believe there may be other stolen travel trailers connected to this file that may have been sold to unsuspecting buyers.  Specifically, detectives are looking for a 2013 Dutchman Denali 268RB travel trailer that has been registered using fabricated information and is currently unaccounted for, and are asking for the public’s help in locating it.  It is believed that the trailer may have been sold by Alyn Waage to a buyer who was unaware that it was stolen. 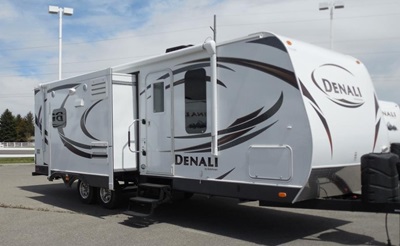 If you have purchased any travel trailers, recreational equipment, or other property from these individuals in the last 18 months, or have any information related to these matters, please contact the Edmonton Police Service at 780-423-4567 or #377 from a mobile phone.  Anonymous information can be submitted to Crime Stoppers at 1-800-222-8477 or online atwww.tipsubmit.com/start.htm.

For more information on how to avoid buying a stolen vehicle, please visitwww.edmontonpolice.ca/crimeprevention and click on the Protecting Property / Buyer’s Guide for Used Vehicles link.